Inosine (2’ Deoxyinosine) is historically considered a universal base, and it is therefore widely used to create degenerate positions in a nucleotide chain. However, Inosine is structurally a guanosine lacking its 2-amino group. Inosine has been shown to bind preferentially to dC and dA, and less strongly to dT and dG. Typically, Inosine is used at the third position of a codon, so to create “degenerate” PCR primers and probes that will anneal to degenerate target DNA sequences. However, as written above, Inosine binds preferentially to dC and dA, especially when it is placed at the third position of a codon. Therefore, it is advisable to mix Inosine-primers with non-Inosine primers, so to ensure sufficient diversity in the PCR products. 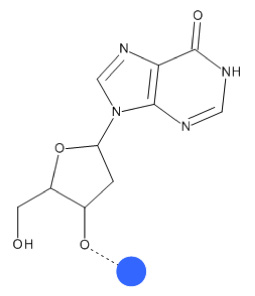